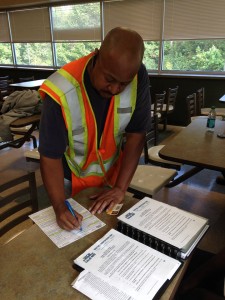 A Smithfield worker joining up with UFCW Local 400

During the first few days and months after one of our members starts their new job, we have an important opportunity to reach out and make a strong relationship with them.

If workers primarily hear about the union from management instead of from us, they are much less likely to want to join and/or become active.

However your local approaches new member orientation, always consider how you can involve existing members in the process. Some locals have developed “welcoming committees” where members volunteer to be part of a group of co-workers who welcome new hires, share their own stories and learn about the recent hires. Some of the “welcoming committee” members may be stewards and some may not.

If in an “open shop” or right-to-work environment, it’s important connect with new workers right away and make sure they know what their rights are and why they should join with us. Even if they have a probationary period, becoming a part of our union and learning what we stand for from the beginning is beneficial in multiple ways (including management knowing our numbers and thus our power to make changes).

Like other member education, it’s important for new member orientations to be interactive, allowing for the recent hires to ask questions and share their thoughts and interests.

Many locals cover these topics:

Use the Sample New Member Meeting Agenda and the Sample Short New Member Orientation to help you prepare for meetings with new members.

One of the best ways to connect and build relationships with members is when they’re first hired. And the best situated people to do this are the new hires’ co-workers. At many local unions, stewards fill this role. In others, the role is shared with members who are part of a “welcoming committee.” A welcoming committee adds an additional tier of member leaders at the worksite, alongside stewards. Their role may be limited to welcoming new co-workers or may expand to also communicate with members during bargaining, elections and other key moments.

This is a sample conversation that welcoming committee members may have with new hires. It is meant as an outline; when holding trainings with members, it’s important to help members feel confident about their own conversational ability– and to not worry about sticking to ‘the script.’ Most importantly, welcoming committee members should be encouraged to listen to their co-workers.